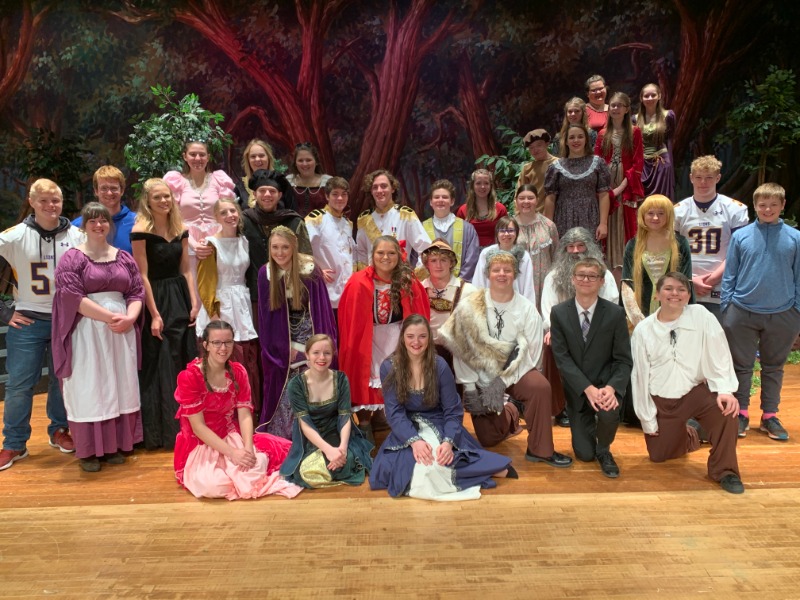 Into the Woods begins with a number of familiar fairy tale characters and stories. Cinderella wishes to attend the Prince’s festival, but her cruel stepsisters and stepmother are trying to prevent her from going. Jack wishes for a better life; but his mother, desperate for money, makes him take his cow, Milky White, into the woods to sell her. Little Red Riding Hood visits the Baker and the Baker’s Wife to purchase bread to take to her sick grandmother in the woods.

Meanwhile, the Baker and his wife lament the fact they are childless. Soon, the Witch from next door visits and reveals she is the cause behind their infertility: in the past she placed a curse on their family because they stole from her precious garden. In order to reverse the curse, the Witch assigns them a series of tasks to complete in “three days time.” During their quest to fulfill the witches' demands, they encounter Little Red Riding Hood, Rapunzel, Cinderella in the woods. Each story is altered and intertwined, and most eventually work towards the same goal, but not until they each realize the repercussions of their desired “happily ever afters.”

New this year is a “people’s choice award” fund raiser at the musical. Each character will make a box representing themselves and patrons will be asked to put money into the box of their favorite actor/character. All funds will go toward play expenses such as costumes and sets. We will give first, second, and third place winners a small prize.

2020 winners for the people choice awards:

“The fall musicals have been my favorite part of each of my last four years. The feeling of being on stage performing with your best friends is something that you can’t get anywhere else. The group energy makes you feel like you could do anything. It makes you want to cry, dance, and sing with your whole being all at the same time. We put so much work into the musicals, that performing is bittersweet because you know that this is what you’ve worked for, but it also means it’s coming to an end. Being in musicals has helped me to develop the confidence that I have today and I would encourage anyone to participate. It is something I am going to miss very much and I’m very grateful that I’ve had this opportunity at Central Lyon.” ~Noelle M.