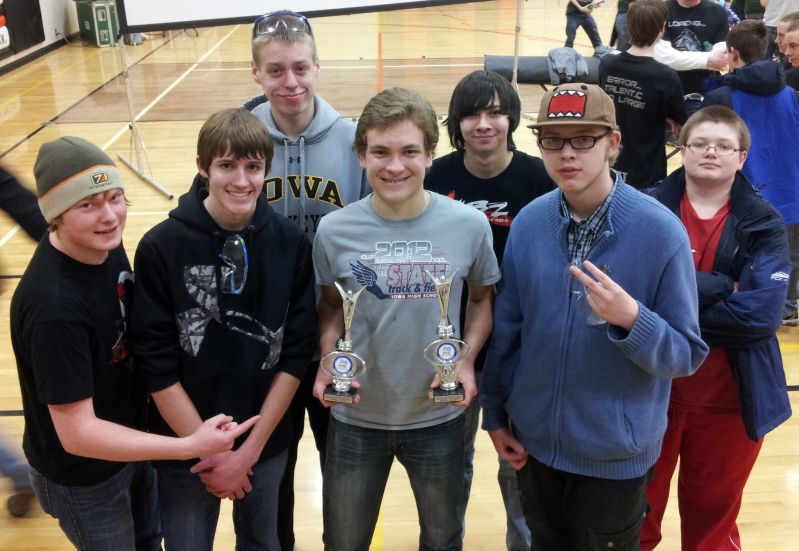 The team after qualifying for state

The robotics club competed in the 2013 FTC Iowa State Championships in Iowa City on February 23 and was part of the 2nd place finalist alliance!

The competition started in the morning with six qualifying matches per team. There were 48 teams competing at state and they were divided into two divisions of 24 teams each. After each team had six qualifying matches, teams were ranked based on their performance in those matches. We won four out of six qualifying matches, putting us 9th out of 24 teams in our division. Then, Alliance Selection was held. The top four teams in each division picked two more teams each to be part of their alliance to compete in the finals. We were a first round pick by the 4th team in our division, and our alliance then went on to win our divisional championship. We then had to compete against the winning alliance from the other division for the final championship. It was best two out of three and our alliance won the first match and then lost the second, leaving it down to one final match. The final match was very close, but the winning alliance pulled ahead in the end to win the championship, leaving us the runner-up.

Each match consists of two teams of two robots per team, all in a 12' by 12' game area. The robots pick up rings off a rack and then hang the rings on another rack to score points. The game consists of a 30 second autonomous period, in which the robot has to operate by itself using sensors, and then a 2 minute period in which the robot is controlled by two drivers. Click here to learn more about the First Tech Challenge (FTC).

We qualified for state by placing 4th out of 23 teams at the tournament in Sergeant Bluff on Saturday, Feb. 9.