Tonight
A chance of rain between 3am and 4am, then a slight chance of showers and thunderstorms after 4am. Partly cloudy, with a low around 62. North northeast wind around 5 mph. Chance of precipitation is 20%.
Monday
A chance of sprinkles before 7am. Partly sunny, then gradually becoming sunny, with a high near 88. East northeast wind 5 to 10 mph.
Monday Night
Clear, with a low around 59. Northeast wind 5 to 10 mph.
Weather forecast provided by weather.gov.
Search
Main Navigation 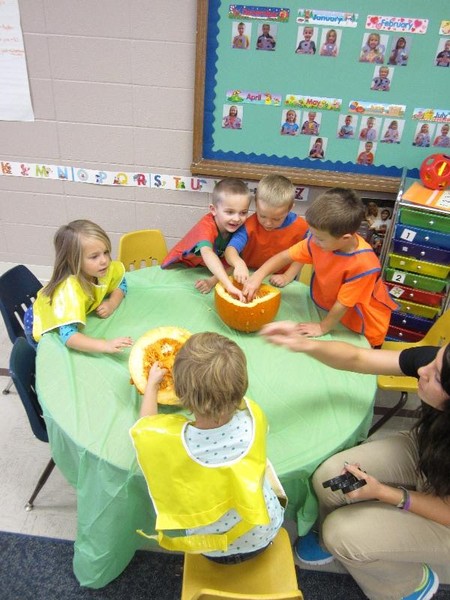 The preschoolers just finished a study on the topic of pumpkins.  The students asked questions about what they wanted to know about pumpkins and then had many learning opportunities to answer these questions.  The preschoolers learned that there are a variety of kinds and colors of pumpkins.  We measured and weighed pumpkins, opened up pumpkins to see what was on the inside, pretended to grow and sell pumpkins at the "pumpkin patch" in our dramatic play area, read stories about pumpkins, and experimented to see if pumpkins will float.  The students also learned about the life cycle of a pumpkin and the different kinds of foods people make from pumpkin.  At the end of the study, the students and families celebrated by having a pumpkin snack, watching a video the students made about pumpkins, and played pumpkin bingo.  The students really enjoyed the study and learned a lot.