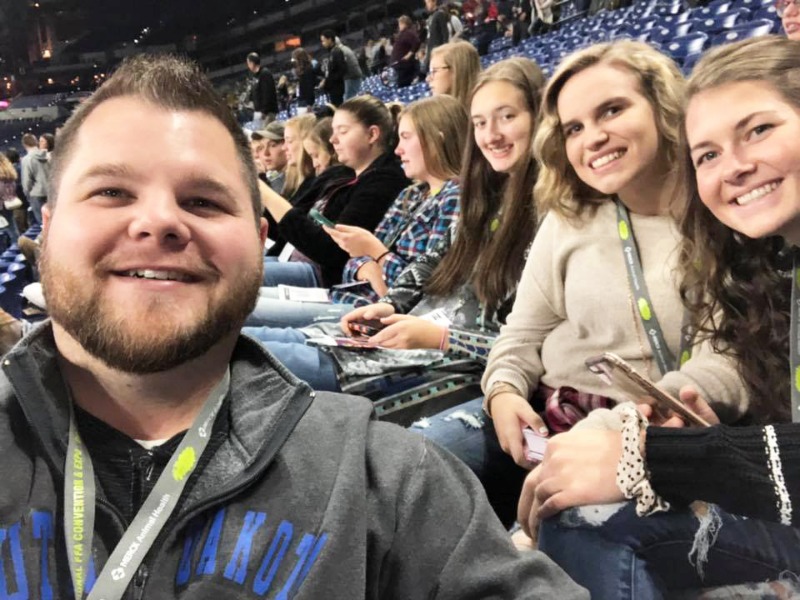 On the evening of Tuesday, October 23rd, ten FFA members from Central Lyon got onto a charter bus and rode for eleven hours. They arrived at their first stop the next morning. Fair Oaks Dairy Farm located in Fair Oaks, Indiana was the first stop of the trip. At Fair Oaks, we were able to take a tour of the dairy and pig adventure. The FFA members This involved getting onto a bus and going to the dairy barns where the bus drove through, so we could see what was happening while listening to an audio recording that was explaining how the farm was run. Once done with the barns, we were able to go to a viewing area of the milking parlour, and then got back on the bus to head for the pig adventure. The pig adventure was mostly a self guided tour where we were able to look through viewing windows to watch baby pigs, guilts, and sows. Afterwards we headed back to the main part of the farm where we went through the crop adventure and then got to witness a calf be born. Once done at the farm, we headed back to bus and took off towards Greenfield where we stayed for the remainder of the trip. Our chapter was lucky enough to get tickets to the Garth Brooks concert, which was on Wednesday night. Everyone had a blast at the concert and really enjoyed the amazing show that Garth put on. Elizabeth Huyser said, “That was the best concert to go to for it being my first concert!”

Starting the next morning we headed for National Convention where we started the day at the shopping mall and expo building. In this building there were many things to do such as visiting booths to learn all about different topics, getting as much as free stuff as possible, and visiting the shopping mall to get some cool FFA apparel. We also went to the Indianapolis Arts Garden to watch Devin Miller perform an assortment of music hits with the band. We attended the FFA Talent session at Bankers Life Fieldhouse, where we mostly heard people singing, but also saw some dancing and other talents. We also attended multiple different sessions while we were there. During these sessions we got to witness other members receive multiple different awards, and see some of the winning talent acts perform. Judson Laipply was one of keynote speakers we had the honor of listening to him. His main message was to get off the struggle bus, and after the message we got to witness his Evolution of Dance. The Evolution of Dance is a dance that is filled with multiple different dance moves from different decades.

Our group also got to tour the South Side Landfill, which was a unique experience. We learned the history behind the landfill at the Golf Course and then got onto the tour bus and went to the actually landfill. We drove around the landfill and got to see the process of how a landfill works and all the different machines that they use. Overall it was more than anyone would have thought it to be, and at the end we got to tour the greenhouse. The greenhouse ties into the landfill because the methane gas that is produced off of the landfill is collected in order to run the greenhouse. We also received a poinsettia as a small gift from the landfill as an appreciation token for us taking the tour.

Haley Borman “My favorite part of National Convention was listening to Judson Laipply’s message and then watching him perform his evolution of dance.

Josh Rockhill “National Convention is always a trip that students and I can look forward to each year. For me, it is exciting to see what the kids take from the events that happen in Indianapolis and on the trip. I also believe that this year was special because students were finally able to see one of our own in the national realm of the FFA”