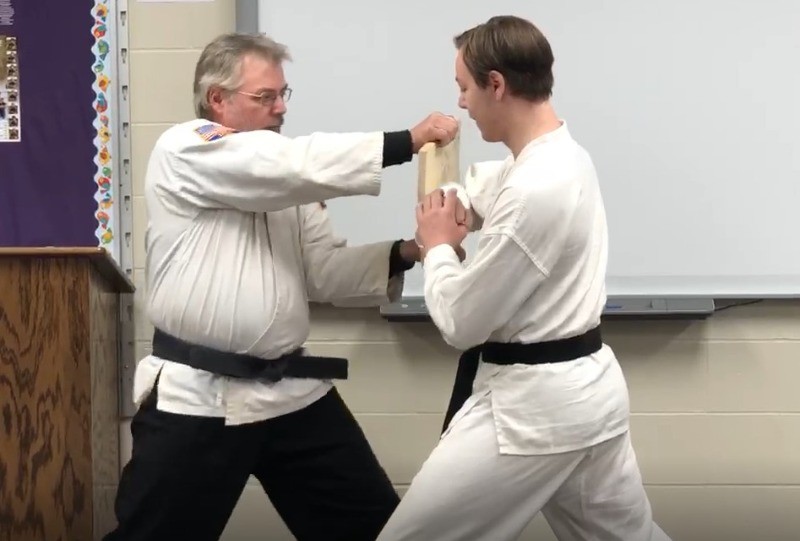 We asked teachers Mrs. Allen and Mrs. Hakeman, and Principal Engleman their thoughts of the demonstration. Mrs. Allen said, “It was so neat to see your talents presented to your classmates and teachers. I don’t know if many in the building were aware that you had these skills. We really enjoyed it. I’m not-so-sure how your dad can break a board with his head and not have a headache the rest of the day.” Mrs. Hakeman commented, “I thought it was very impressive – the science, the technique, and the follow through looked like it could hurt if something went wrong. I have never seen this in person so having the opportunity was one of a kind.” Principal Engleman said “I thoroughly enjoyed the demonstration that you provided. I always enjoy watching students showcase their many talents and you are certainly talented in this area. It takes courage to stand up in front of one’s peers to perform and you did an excellent job.”

Black Belt Kert Cohoon started taekwondoe in 1995. Black Belt Konner Cohoon has been doing Taekwondo for eight years. He started when he was 9 years old at the Rock Rapids Taekwondo Center on Main Street. Normally it takes someone five years to get their black belt, but it took him eight years to achieve his black belt. There is a difference between Taekwondo and karate. Karate specializes in fast moves while Taekwondo specializes in fast kicks. Konner believes "the students in Taekwondo are cooler than all those karate people." The part of Taekwondo that he likes the most is free-sparring, board-breaking, and testing to improve your rank. Taekwondo is most definitely a worthwhile experience, it may not seem like you’re learning much, but when you get into free sparring, you will see that you actually learned something. If you don’t continue with Taekwondo or give it a chance, you will be saying goodbye to all the fun things that Taekwondo has to offer, so stick with it and give it a chance. Konner commented, “trust me, you will have fun if you try Taekwondo.” He decided to demonstrate breaking a board for Mrs. Allen’s Speaking Fundamentals class not just for the sake of the speech, but so that maybe some people will look at it, see it, or watch the video and decide to try Taekwondo.

Principal Engleman had questions for Konner, as well. Konner responded, "I haven't been hurt while hitting a board. Everything we do is so that you don’t get hurt, even if you have to take it one step at a time, now if stop and don’t go through the board, then it will hurt but if you go through the board, it won’t hurt, and you will have confidence that you will be able to do it again and do it better the next time.” It’s not really a conflict between physical and mental, one of the tenants is called Self-Control and it means mental and physical discipline. So, if you can control the mind to do what you want to do like not running around, standing at attention, and listening to the instructor, you will do amazing work for the next rank and you will know how to defend yourself. Mental and physical work together. What got Konner interested in Taekwondo in the first place was wanting to know how to defend himself, especially with how crazy the world is these days. Taekwondo teaches you to be polite and respectful, have honesty and take responsibility, and always finish what you start. It also teaches you how to control yourself, and to never give up no matter the odds. Konner stated, “That last one I wish students would take more seriously because I’ve seen more students start classes one night and never return than the students that stick around. But you know what, Taekwondo is a load of fun and I truly, deeply wish more students were interested in it so that we could have fun together, have larger test nights, and larger classes.”

Teacher Mrs. Hakeman only had one question for Konner, “what is your ultimate goal?" to which he replied, “My ultimate goal is to achieve my 8th degree black belt and teach a class of students myself, I don’t want to be the student my entire life but also want to be the teacher that teaches future generations that might be interested in joining Taekwondo.”