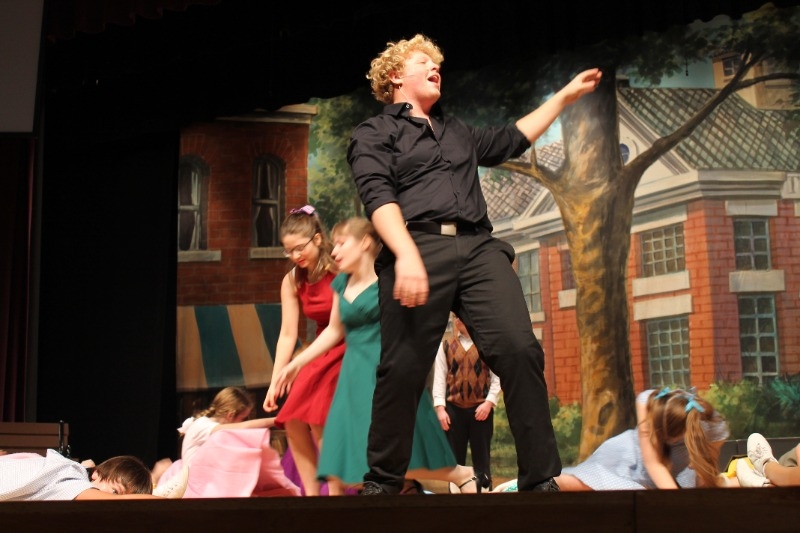 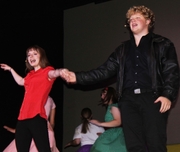 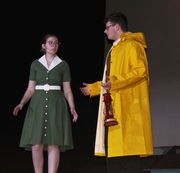 BYE BYE BIRDIE performances were October 27, 29 and 30 in the Forster Auditorium. It's a funny and heartwarming story that had the audience laughing throughout the show!

Bye Bye Birdie tells the story of a rock and roll singer who is about to be inducted into the army. When the draft selects rock star Conrad Birdie (played by Chase T), his fans are devastated, but none more than struggling songwriter Albert Peterson (played by Matthew L), whose song Birdie was just about to record. Albert's longtime girlfriend, Rosie (played by Anna W), pushes Albert to write a new tune that Birdie will perform on television to a fan selected in a contest. The scheme works, with young Ohio teenager Kim McAfee (played by Anna VA) declared the winner, but no one has counted on the jealous wrath of her boyfriend (played by Aaron S).(credit: Google)

Q: Why was Bye Bye Birdie chosen for the play?
A1: "We look at who we will probably have try out and then try to find a musical that will have the correct number of roles."
A2: "We choose shows based on the students we have. This year we had a lot of upper classmen students involved so we wanted to have a show with a large cast that would showcase all the talented students we have."

Q: How do you balance your classes and the play?
A1: "We put in a lot of night and weekend time."
A2: "Musical season is very busy, and we spend a lot of time at school and away from our families, but it’s something we really enjoy, and we have such fun working with the students, which makes it all worth it."

Q: When did you start working on the play?
A1: "The first week of school."
A2: "Musical rehearsals began when school started."

Q: What is the most stressful part about setting up the play so far?
A1: "For me it has been the sets, they are usually the most labor intensive."
A2: "This year we are trying something new!  We are using an online ticketing system. New things like that can cause a little extra stress as we are trying to set up and learn a new system, but we believe it’s going to work well and hope that people will like the convenience of it."