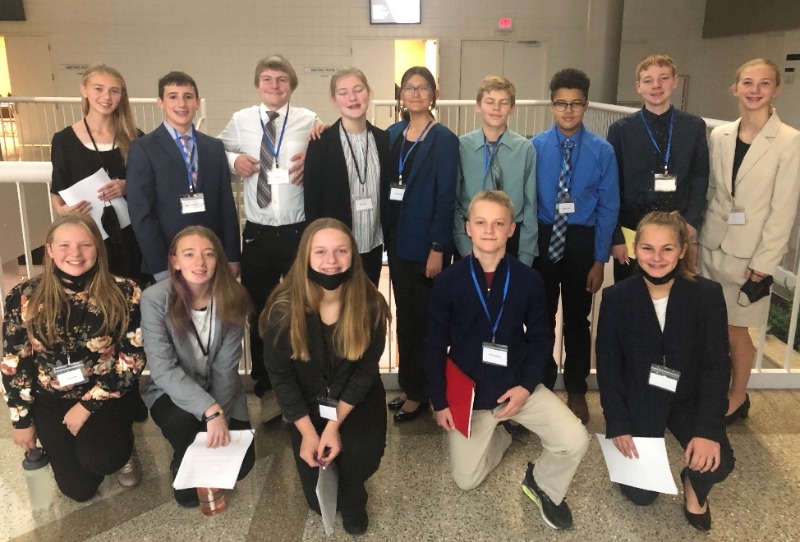 Middle school mock trial regional competition took place in Sioux City on November 3.  During three rounds of competition,  each of our teams presented their case in two rounds that day (although they did not compete against each other.)  Team Fieri qualified to compete in the state competition in Des Moines on December 1-3.  They were the first place team for our regional.  Team Ramsey finished the day in third place and is in consideration as an alternate for the state competition.  Both teams were undefeated on the day, so congrats to both teams!

The case is based on a murder that occurred at a restaurant in Bondurant, IA.  One business partner of the restaurant was murdered, and the other partner is on trial.  The partner that is on trial had been contacted about becoming a TV cooking personality and was potentially leaving to go to Hollywood to pursue a TV career.  The partner who was murdered had a history of gambling and was found to have been embezzling from the restaurant, which leads to a potential motive-revenge!

The case involves three witnesses for each side of the trial (Plaintiff and Defense.)  There are four attorneys on each side who question witnesses, as well as present the Opening and Closing statements of the case.  The competition itself is not based on the outcome of the case, participants are judged on how they present themselves and the strategies they use to try and win.

An exhibition was held on Friday, November 12, in the HS Media Center.  Because parents were not able to attend the regional competition, we invited friends and family to come in and watch our two teams scrimmage against one another in an abbreviated round of competition.