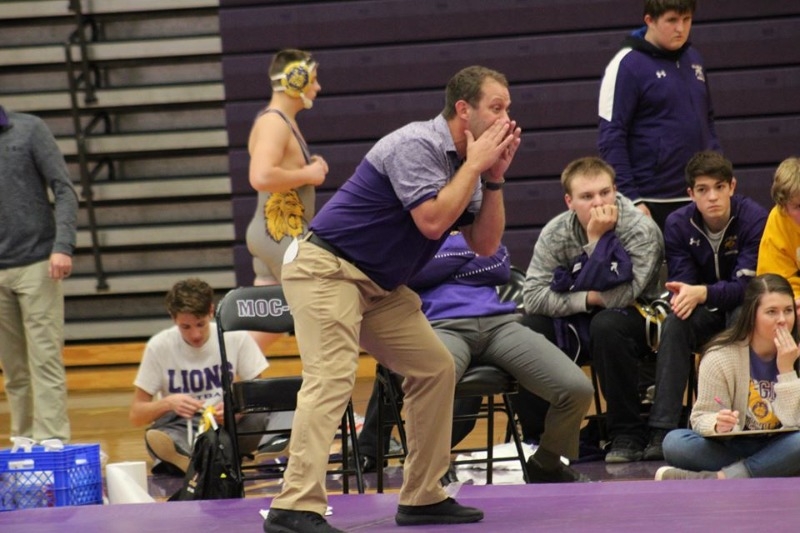 ​​​​​Do you know when and how wrestling began at Central Lyon? Can you recall the first coach or know how many coaches have led Central Lyon wrestling since its inception? A former Central Lyon Superintendent was instrumental in getting the wrestling program started when he was hired in 1970. The following information was taken from a paper written in 1980 by the self-described founding father of Lion wrestling, Jim Slade.

A Decade of Wrestling at Central Lyon and Its History

"It all began back in June of 1970 when I was to be hired as Superintendent at Central Lyon. Since our family had been involved in wrestling at other schools, it was important that wrestling be a part of the program at any new school that I was to serve. After putting this request to the Board of Education at that time, they whole heartedly agreed to install it as soon as we were able to find a coach. Since all positions had been filled at that time, there was no chance in finding a wrestling coach. So rather than wait a year, I got Dick Null to agree to coach them with the assistance of three young college students. Now Dick didn't know a take down from a reversal, but he knew how to coach and handle young people. So we were off and running.

1st Year -- We took our bumps. Practice was held at Doon with Dick Null driving a bus loaded with wrestlers. The mat was carried back to Rock Rapids for meets in the old hot lunch bus. Some of the wrestlers that had a few wins that were were Tim Steiner (a freshman), Bill Lane, Milt Hilbrands, Bob DeKoning, and Mike Huyser.

2nd year -- We hired Larry Michelson as head coach and Larry stayed with us for three years. Larry did an excellent job and spent a lot of time working with the 6th, 7th, and 8th grades as well since he knew this is where the future teams were to come from. During his tenure we started to win a few duals and placed high in a tournament or two and even won the Siouxland Conference Tournament in 1973. That was the year West Sioux joined the conference but were not allowed to wrestle all of their varsity in the tournament. The teams that participated at that time were George, Central Lyon, West Sioux, Akron, and Rock Valley. That particular year there was what was referred to as the "fearsome foursome" who compiled over 70 wins against 20 some defeats. They were Scott Slade at 112 (a sophomore), Randy Van Aarsten at 119 (a junior), Tim Steiner at 126 (a senior), and Kelvin Sohl at 138 (a junior).

Wrestling practice was held during the second year in what we now call the metals shop. They would move the band instruments aside and roll out the mats and get with it. The season of 1972-1973 practice was held in our present facility. Coach Michelson resigned at the end of 1974 after having done an excellent job of getting wrestling off to a good start. In 1974 Dennis Smith who was our assistant took over the program and was assisted by Wayne Tucker. Denny stayed with us just the one year. In 1975 Coach Grant took over the program and has completed his fifth year."

While reflecting on the first decade of wrestling at Central Lyon, Slade stated that the worse dual loss of 2-60 occurred in their inaugural year vs West Sioux, with the only points being a draw by freshman Tim Steiner. Their biggest victory during the first decade was 65-0 vs Boyden-Hull in 1978.

Hank Grant continued as head coach until 2005 when he was replaced by Curtis Eben. Grant had 51 state qualifiers and 26 state place winners during his 30 years as head coach, in addition to two state champions. Keith Van Beek joined as Grant's assistant in 1998, became co-head coach with Eben from 2005 to 2009; thereafter continuing as assistant coach. According to Coach Eben, Central Lyon combined our wrestling program with George-Little Rock in the fall of 2009.