I have been teaching at Central Lyon since 2009.  I teach Physics, Physical Science, Earth Science, Principles of Engineering and AP Chemistry.  My page is currently under construction.  Please contact me with any questions or concerns, and check back throughout the year as the page will continually be updated.

Throughout the second semester, the Central Lyon Physical Science students have been using concepts learned in class to design a space settlement.  Their requirements were to design a settlement capable of continuous Mars to Earth to Mars orbit.  Their settlement had to be able to support a maximum population of up to 7200 residents.  Some would be permanent residents while others would be on their way to and from Mars.  The expected duration of a one way trip was to be 9 months, so many different factors had to be considered, such as entertainment, education, exercise and living quarters, to name a few.  Below are the three presentations completed by the three sections of Physical Science.  The students worked hard as a team and did a great job thinking outside the box. 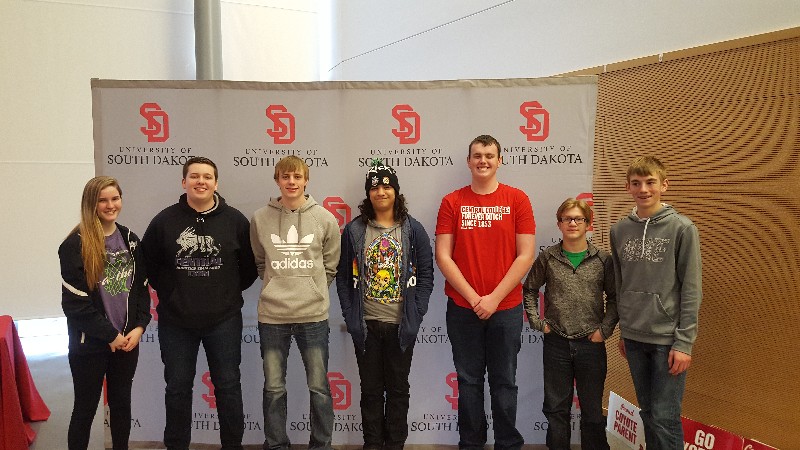 On Thursday March 30, seven Central Lyon Robotics students participated in an Activity Bot coding competition at the University of South Dakota in Vermillion.  35 schools were registered from South Dakota, Nebraska, and Iowa.  Central Lyon placed 13th and 17th for the day, and both teams came away with ideas to incorporate in to next year's robots.  Students who attended were Mitch Haselhoff, Michael Stillson, Jacob VanVeldhuizen, Jaylen Klein, Rhiannon Keegan, Taeron Olson, and Ben Van Aartsen.  After the competition, the students had the opportunity to learn more about computer science majors and the job outlook for those interested in a computer science degree.  The students also were given information on a new dual credit class USD will offer online starting this fall.  Interested students can now take a 3 credit Introduction to Computer Science course through USD that normally would cost $780.  USD is offering the course to high school students for $120.  Students will still need to purchase their own text book.  If interested, students or parents can contact Jessica Harman or myself for more information.

Central Lyon formed its first robotics club in the fall of 2012.  Each year the team, composed of students in grades 9-12, must build a robot to perform specific tasks. We also offer robotics to juniors and seniors as part of our Principles of Engineering Class in alternate years, which began in the fall term of 2014.  We compete in three league meets in October, November, and December, and our League Championship will be held in January in Sioux City.  Four teams from the League Championship will qualify for the State Championships in Iowa City in February.  Thirteen teams from the State Championships will then qualify for the North Super Regional to be held in Cedar Rapids later in March.  From there, a select number of teams will move on to the World Championships to be held in St. Louis at the end of April.  If anyone is interested in learning more about FTC robotics please contact Bill Allen at ballen@centrallyon.org.

The 2018 robotic challenge | game is called relic recovery, and more information can be found here: www.firstinspires.org/robotics/ftc/.  Below is a link to YouTube and a video describing past competitions.

Ring It Up Robotics Competition       https://www.youtube.com/watch?v=MCQ_pgSw_-8

Students from Central Lyon have attended this competition since 2010. The competition combines students from Iowa, South Dakota, Nebraska, and Texas split in to four teams of roughly 60 students each. Teams are given less than 24 hours to complete a space settlement and develop a presentation for the judges. Each team designs a proposal for a Space Settlement capable of supporting a small human population in the future. Students are required to follow specific guidelines outlined by NASA employees and contractors.  Past years have included settlements on Mars, travel ships transporting people and goods to and from Mars, and settlements on Mercury.

Our students represent Central Lyon well.  As their chaperone, I am extremely impressed with the students' commitment to the competition, even though the competition is designed to be very stressful at times.  Our students contribute more than their share of knowledge and effort to their groups' final presentation. Below is a slide presentation of some of the pictures we took while on the trip.

The high school physics class competes annually in the regional Rube Goldberg competition at Minnesota State University, Mankato. In the spirit of Rube Goldberg, each machine must use a minimum of 20 steps to complete a task.  A step is considered to have occurred if a transfer of energy took place. Our teams work hard leading up to the competition on their machines, and we look forward to displaying them during the PTC Supper in March. Below is a link to the photo page from the 2012 competition.