Current conditions as of 24 Feb 19:15 pm CST
Tonight
A slight chance of snow before 11pm, then a chance of flurries between 11pm and midnight. Partly cloudy, with a low around 20. West southwest wind around 5 mph. Chance of precipitation is 20%.
Thursday
Sunny, with a high near 42. West wind 5 to 10 mph becoming west southwest 10 to 15 mph in the afternoon.
Thursday Night
Mostly clear, with a low around 24. Breezy, with a south wind 10 to 15 mph increasing to 20 to 25 mph after midnight. Winds could gust as high as 30 mph.
Weather forecast provided by weather.gov.
Search
Main Navigation

Our Central Lyon/George-Little Rock football had their undefeated season come to an end at the state 2A championship. They dominated at the semi-finals in the UNI dome, defeating Camanche 41-0 at the Iowa High School Football Playoffs. The Lions lost the title game to Waukon 14-28. They had an unforgettable season with much to be proud of. 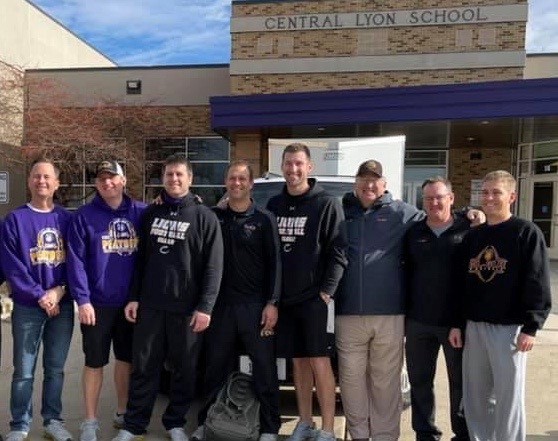 Coaches: Kruse, Geerdes, Lupkes, Eben, Engle, Postma, Van Beek, Vigdal
The Lions last competed at the UNI dome in 2008, and have achieved the ultimate state title prize three times -1976, 1977, and 2006. Six of the nine coaching staff are former Central Lyon football players, three of which were integral parts of state championship wins themselves (Postma in 1976 & 1977, Lupkes and Geerdes in 2006). Head coach Eben also is no stranger to success in the dome as he was a standout player of the state runner-up 1999 team. Congratulations to the team and coaches.
Share via email